Nearly three dozen journalists at a broad range of major publications have been targeted by a far-right group that maintains a Deep Web database listing the personal information of people who threaten their views. This group specializes in encouraging others to harass those targeted by their ire, and has claimed responsibility for dozens of bomb threats and “swatting” incidents, where police are tricked into visiting potentially deadly force on the target’s address. 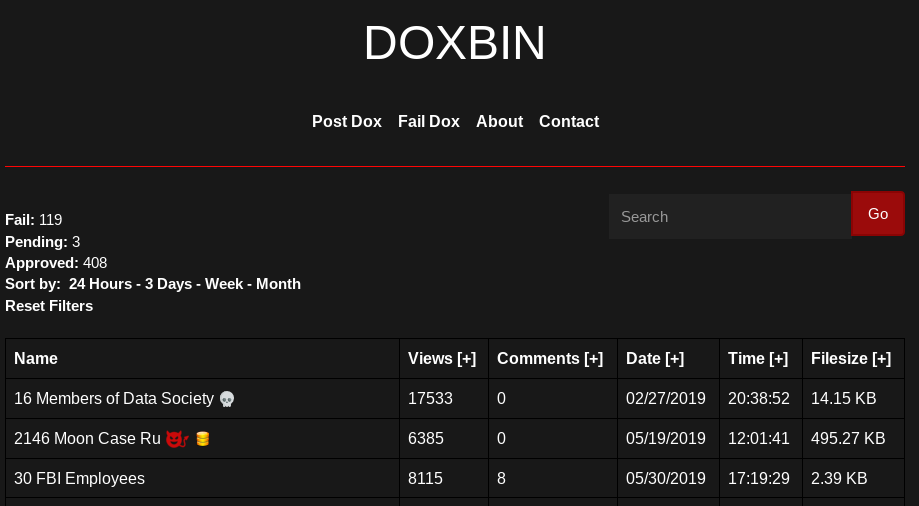 At issue is a site called the “Doxbin,” which hosts the names, addresses, phone number and often known IP addresses, Social Security numbers, dates of birth and other sensitive information on hundreds of people — and in some cases the personal information of the target’s friends and family.

A significant number of the 400+ entries on the Doxbin are for journalists (32 at last count, including Yours Truly), although the curators of Doxbin have targeted everyone from federal judges to executives at major corporations. In January 2019, the group behind Doxbin claimed responsibility for doxing and swatting a top Facebook executive.

At least two of the journalists listed on the Doxbin have been swatted in the past six months, including Pulitzer prize winning columnist Leonard G. Pitts Jr.

In some cases, as in the entries for reporters from CNN, Politico, ProPublica and Vox, no reason is mentioned for their inclusion. But in many others, the explanation seems connected to stories the journalist has published dealing with race or the anti-fascist (antifa) movement.

“Anti-white race/politics writer,” reads the note next to Pitts’ entry in the Doxbin.

Many of those listed on the site soon find themselves on the receiving end of extended threats and harassment. Carey Holzman, a computer technician who runs a Youtube channel on repairing and modding computers, was swatted in January, at about the same time his personal information showed up on the Doxbin.

More recently, his tormentors started calling his mobile phone at all hours of the night, threatening to hire a hit man to kill him. They even promised to have drugs ordered off the Dark Web and sent to his home, as part of a plan to get him arrested for drug possession.

“They said they were going to send me three grams of cocaine,” Holzman told KrebsOnSecurity.

Sure enough, earlier this month a small vial of white powder arrived via the U.S. Postal Service. Holzman said he didn’t open the vial, but instead handed it over to the local police for testing.

On the bright side, Holzman said, he is now on a first-name basis with some of the local police, which isn’t a bad idea for anyone who is being threatened with swatting attacks.

“When I told one officer who came out to my house that they threatened to send me drugs, he said ‘Okay, well just let me know when the cocaine arrives,’” Holzman recalled. “It was pretty funny because the other responding officer approached us and only caught the last thing his partner said, and suddenly looked at the other officer with deadly seriousness.”

The Doxbin is tied to an open IRC chat channel in which the core members discuss alt-right and racist tropes, doxing and swatting people, and posting videos or audio news recordings of their attacks.

The individual who appears to maintain the Doxbin is a fixture of this IRC channel, and he’s stated that he also was responsible for maintaining SiegeCulture, a white supremacist Web site that glorifies the writings of neo-Nazi James Mason.

Mason’s various written works call on followers to start a violent race war in the United States. Those works have become the de facto bible for the Atomwaffen Division, an extremist group whose members are suspected of having committed multiple murders in the U.S. since 2017.

Courtney Radsch, advocacy director at the nonprofit Committee to Protect Journalists, said lists that single out journalists for harassment unfortunately are not uncommon.

“We saw in the Ukraine, for example, there were lists of journalists compiled that led to harassment and threats against reporters there,” Radsch said. “We saw it in Malta where there were reports that the prime minister was part of a secret Facebook group used to coordinate harassment campaigns against a journalist who was later murdered. And we’ve seen the American government — the Customs and Border Protection — compiling lists of reporters and activists who’ve been singled out for questioning.”

Radsch said when CPJ became aware that the personal information of several journalists were listed on a doxing site, they reached out and provided information on relevant safety resources.

“It does seem that some of these campaigns by extremist groups are being coordinated in secret chat groups or dark web forums, where they can talk about the messaging before they bring it out into the public sphere,” she said.

In some ways, the Doxbin represents a far more extreme version of Exposed[.]su, a site erected briefly in 2013 by a gang of online hoodlums that doxed and swatted celebrities and public figures. The core members of that group were later arrested and charged with various crimes — including numerous swatting attacks.

One of the men in that group — convicted serial swatter and stalker Mir Islam — was arrested last year in the Philippines and charged with murder after he and an associate allegedly dumped the body of a friend in a local river.

Swatting attacks can quickly turn deadly. In March 2019, 26-year-old serial swatter Tyler Barriss was sentenced to 20 years in prison for making a phony emergency call to police in late 2017 that led to the shooting death of an innocent Kansas resident.

My hope is that law enforcement officials can shut down this Doxbin gang before someone else gets killed.