Much of the fraud involving counterfeit credit, ATM debit and retail gift cards relies on the ability of thieves to use cheap, widely available hardware to encode stolen data onto any card’s magnetic stripe. But new research suggests retailers and ATM operators could reliably detect counterfeit cards using a simple technology that flags cards which appear to have been altered by such tools. 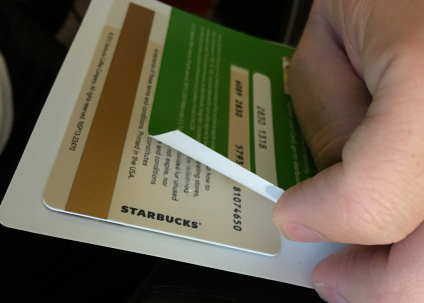 A gift card purchased at retail with an unmasked PIN hidden behind a paper sleeve. Such PINs can be easily copied by an adversary, who waits until the card is purchased to steal the card’s funds. Image: University of Florida.

Researchers at the University of Florida found that account data encoded on legitimate cards is invariably written using quality-controlled, automated facilities that tend to imprint the information in uniform, consistent patterns.

Cloned cards, however, usually are created by hand with inexpensive encoding machines, and as a result feature far more variance or “jitter” in the placement of digital bits on the card’s stripe.

Gift cards can be extremely profitable and brand-building for retailers, but gift card fraud creates a very negative shopping experience for consumers and a costly conundrum for retailers. The FBI estimates that while gift card fraud makes up a small percentage of overall gift card sales and use, approximately $130 billion worth of gift cards are sold each year.

One of the most common forms of gift card fraud involves thieves tampering with cards inside the retailer’s store — before the cards are purchased by legitimate customers. Using a handheld card reader, crooks will swipe the stripe to record the card’s serial number and other data needed to duplicate the card.

If there is a PIN on the gift card packaging, the thieves record that as well. In many cases, the PIN is obscured by a scratch-off decal, but gift card thieves can easily scratch those off and then replace the material with identical or similar decals that are sold very cheaply by the roll online.

“They can buy big rolls of that online for almost nothing,” said Patrick Traynor, an associate professor of computer science at the University of Florida. “Retailers we’ve worked with have told us they’ve gone to their gift card racks and found tons of this scratch-off stuff on the ground near the racks.”

At this point the cards are still worthless because they haven’t yet been activated. But armed with the card’s serial number and PIN, thieves can simply monitor the gift card account at the retailer’s online portal and wait until the cards are paid for and activated at the checkout register by an unwitting shopper.

Once a card is activated, thieves can encode that card’s data onto any card with a magnetic stripe and use that counterfeit to purchase merchandise at the retailer. The stolen goods typically are then sold online or on the street. Meanwhile, the person who bought the card (or the person who received it as a gift) finds the card is drained of funds when they eventually get around to using it at a retail store.

Traynor and a team of five other University of Florida researchers partnered with retail giant WalMart to test their technology, which Traynor said can be easily and quite cheaply incorporated into point-of-sale systems at retail store cash registers. They said the WalMart trial demonstrated that researchers’ technology distinguished legitimate gift cards from clones with up to 99.3 percent accuracy.

While impressive, that rate still means the technology could still generate a “false positive” — erroneously flagging a legitimate customer as using a fraudulently obtained gift card in a non-trivial number of cases. But Traynor said the retailers they spoke with in testing their equipment all indicated they would welcome any additional tools to curb the incidence of gift card fraud.

“We’ve talked with quite a few retail loss prevention folks,” he said. “Most said even if they can simply flag the transaction and make a note of the person [presenting the cloned card] that this would be a win for them. Often, putting someone on notice that loss prevention is watching is enough to make them stop — at least at that store. From our discussions with a few big-box retailers, this kind of fraud is probably their newest big concern, although they don’t talk much about it publicly. If the attacker does any better than simply cloning the card to a blank white card, they’re pretty much powerless to stop the attack, and that’s a pretty consistent story behind closed doors.”

Traynor said the University of Florida team’s method works even more accurately in detecting counterfeit ATM and credit cards, thanks to the dramatic difference in jitter between bank-issued cards and those cloned by thieves.

The magnetic material on most gift cards bears a quality that’s known in the industry as “low coercivity.” The stripe on so-called “LoCo” cards is usually brown in color, and new data can be imprinted on them quite cheaply using a machine that emits a relatively low or weak magnetic field. Hotel room keys also rely on LoCo stripes, which is why they tend to so easily lose their charge (particularly when placed next to something else with a magnetic charge).

In contrast, “high coercivity” (HiCo) stripes like those found on bank-issued debit and credit cards are usually black in color, hold their charge much longer, and are far more durable than LoCo cards. The downside of HiCo cards is that they are more expensive to produce, often relying on complex machinery and sophisticated manufacturing processes that encode the account data in highly uniform patterns.

These graphics illustrate the difference between original and cloned cards. Source: University of Florida.

Traynor said tests indicate their technology can detect cloned bank cards with virtually zero false-positives. In fact, when the University of Florida team first began seeing positive results from their method, they originally pitched the technique as a way for banks to cut losses from ATM skimming and other forms of credit and debit card fraud.

Yet, Traynor said fellow academicians who reviewed their draft paper told them that banks probably wouldn’t invest in the technology because most financial institutions are counting on newer, more sophisticated chip-based (EMV) cards to eventually reduce counterfeit fraud losses.

“The original pitch on the paper was actually focused on credit cards, but academic reviewers were having trouble getting past EMV — as in, “EMV solves this and it’s universally deployed – so why is this necessary?’”, Traynor said. “We just kept getting reviews back from other academics saying that credit and bank card fraud is a solved problem.”

The trouble is that virtually all chip cards still store account data in plain text on the magnetic stripe on the back of the card — mainly so that the cards can be used in ATM and retail locations that are not yet equipped to read chip-based cards. As a result, even European countries whose ATMs all require chip-based cards remain heavily targeted by skimming gangs because the data on the chip card’s magnetic stripe can still be copied by a skimmer and used by thieves in the United States.

The University of Florida researchers recently were featured in an Associated Press story about an anti-skimming technology they developed and dubbed the “Skim Reaper.” The device, which can be made cheaply using a 3D printer, fits into the mouth of ATM’s card acceptance slot and can detect the presence of extra card reading devices that skimmer thieves may have fitted on top of or inside the cash machine.

The AP story quoted a New York Police Department financial crimes detective saying the Skim Reapers worked remarkably well in detecting the presence of ATM skimmers. But Traynor said many ATM operators and owners are simply uninterested in paying to upgrade their machines with their technology — in large part because the losses from ATM card counterfeiting are mostly assumed by consumers and financial institutions.

“We found this when we were talking around with the cops in New York City, that the incentive of an ATM bodega owner to upgrade an ATM is very low,” Traynor said. “Why should they go to that expense? Upgrades required to make these machines [chip-card compliant] are significant in cost, and the motivation is not necessarily there.”

Retailers also could choose to produce gift cards with embedded EMV chips that make the cards more expensive and difficult to counterfeit. But doing so likely would increase the cost of manufacturing by $2 to $3 per card, Traynor said.

“Putting a chip on the card dramatically increases the cost, so a $10 gift card might then have a $3 price added,” he said. “And you can imagine the reaction a customer might have when asked to pay $13 for a gift card that has a $10 face value.”

A copy of the University of Florida’s research paper is available here (PDF).

The FBI has compiled a list of recommendations for reducing the likelihood of being victimized by gift card fraud. For starters, when buying in-store don’t just pick cards right off the rack. Look for ones that are sealed in packaging or stored securely behind the checkout counter. Also check the scratch-off area on the back to look for any evidence of tampering.

Here are some other tips from the FBI:

-If possible, only buy cards online directly from the store or restaurant.
-If buying from a secondary gift card market website, check reviews and only buy from or sell to reputable dealers.
-Check the gift card balance before and after purchasing the card to verify the correct balance on the card.
-The re-seller of a gift card is responsible for ensuring the correct balance is on the gift card, not the merchant whose name is listed. If you are scammed, some merchants in some situations will replace the funds. Ask for, but don’t expect, help.
-When selling a gift card through an online marketplace, do not provide the buyer with the card’s PIN until the transaction is complete.
-When purchasing gift cards online, be leery of auction sites selling gift cards at a steep discount or in bulk.